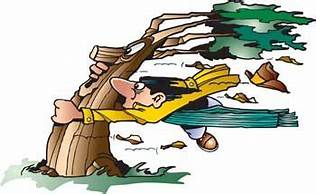 Hey y'all, remember me?  Kind of tall, kind of chunky, kind of sarcastic....yeah that's me.  You may have heard a little something on the news about a 'wind event' called Hurricane Michael.  Stuff got real when Jim Cantore showed up in Panama City wearing a batting helmet and the liquor stores and Waffle Houses all closed up.  If you are half as sick of it as I am, you are struggling.  Thankfully we survived with no injuries.  Our house and yard, not so much.  We had 14 trees down in our yard, and several were very, very large oak trees.  Thank God they fell where they wouldn't harm anyone or do any major damage.  We did have one oak snap in half at the tail end of the high winds that decided to punch some holes in the roof before flying away to another county as kindling.  This of course caused water damage to hardwood flooring and some ceilings.  The good news is we can fix it all.  Being the eternal optimist that I am, we now have a lot of natural light for the yard and house, no leaves to rake, the power bill will be much less this month (this is what happens when you have no power for 11 days), and Lulabelle has enough wood to feed her for several cooks.  See, lemonade out of lemons.  While venturing out a few days after the storm, I did ask the guy at Lowe's if he knew where I could buy some firewood fairly cheaply.  He looked at me like I had three Hillary Clinton heads until I told him I was kidding.  The look of relief was immediate.  In all seriousness, I'm thankful because I know it could have been much worse, and to know that all I have to do is walk outside and gaze upon the sea of blue roofs and debris piles.  I also learned something new, I now know why before there was electricity and cable t.v. families were so large.  In all seriousness, I learned many things which I shall now enumerate for your reading pleasure:  1)  You get to know your neighbors when you are trying to cut trees out of a road and off homes so you can at least think about getting out.  (2) It's actually quite fun to cook for your new lumberjack buddies.  I grilled about 8 pork loins for the beaver brigade, and everyone seemed to enjoy them.  I know several others did a whole lot more providing for their neighbors and the community i.e. Eastside Baptist Church and every other church in town, OBR and all of their volunteers served an insane amount of meals in Tallahassee and Panama City area, and one world-renowned cook who shall remain anonymous.  (3) Cold showers aren't that bad when the temperature is in the 90's.  I told everyone I haven't had that many cold showers since puberty.  After a while you don't even try to talk the boys down because the trust is long gone and they won't believe you.  (4) You get used to seeing devastation on a daily basis.  I actually don't think it is 'get used to' as much as it is 'oh look, more crap (insert maniacal laughter here)'.  A mental numbing if you will.  (5) I absolutely with every fiber of my being hate the phrase 'the new normal.'  Every time I hear that phrase, I want to punch the person and say, "Facial pain....it's the new normal."  I don't of course because I'm generally nice and would look horrible in horizontal stripes (see kind of chunky descriptor).  The bottom line is we are all going through different stages of personal recovery.  I don't mean getting roofs fixed and trees cut up.  I mean the 'Victim, Survivor, Thriver' recovery role.  I categorically refuse to be a victim of anything.  Being a victim means you have no power any more due to the event.  Ain't gonna happen.  Not now, not ever.  God didn't make me to be a victim because I have the victory through Him.  Survivor......maybe.  I'm definitely moving on from the storm and all the garbage there in.  A thriver......now that is the person that in spite of their event actually uses it to propel and energize their self towards a higher goal.  Onward and upwards.  I think I like that.  It's better than going around punching folks.....so I hear but not totally sold on that just yet.  With Christmas coming, I have to be on my good behavior whatever that looks like.  Anyway, y'all please don't forget about us here in the panhandle.  There are a lot of folks living in tents and under tarps because there just isn't any other place to live.  The world moves on.  The t.v. trucks and National Guard are gone.  OBR is already deploying to other areas that need them.  The sun still rises, and we keep trying to put things back together.  It's what we do......well that and go around saying, "It's the new normal."  Riley is not amused but still says, "Hello and why am I wearing a leash?  Where did my fence go?"  Y'all take care.  If you get a moment and feel led, please donate what money you can to OBR and/or any other relief organizations you see fit.  They do a lot and never ask for anything in return.  Just like a lot of folks I've come to know.