I Resolve to Make No New Year's Resolutions 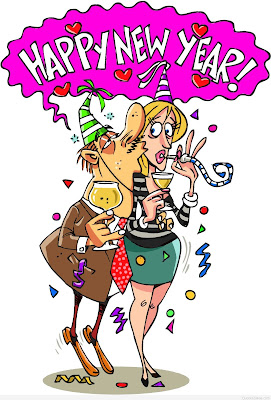 Well, you've gone and done it.  Despite all the warnings, all the lectures, the instructional videos, and the posters at the local health department, you've gone and let yet another year pass you by.  Seems like only a year ago it was January 1, 2017.  The new year was filled with endless hope and a sense of invigorated energy.  This year would be different, things were going to change.  At least that's what you told yourself.  You went and bought the 37-in-1 exercise 'thing', and in only 159 more easy payments it will be all yours.  You've downed gallons of baby-puke green energy drinks that almost always involve Kale.  You swore on the futures of your kids' kids' you would get up at 3:30 a.m. every day to exercise on the 37-in-1 exercise thing, and you made a religious commitment just shy of burnt offerings to stay away from everything from carbs to credit cards.  And yet, here we are about to start a new year.  You have decided the 37-in-1 thing is really good at holding clothes that need ironing; you've convinced yourself that you are helping the economy, every Amazon employee, and every blue-collar worker by going into credit card debt; and you have rationalized a high-carb diet is actually healthful as carbs are energy.  Soooo.....now that we are staring down the barrel of yet another new year, what resolutions are you willing to make this year?  Exercise.....no because everyone knows I'm in shape because, according to my Geometry teacher Ms. Saliba, 'round' is a shape.  Better fiscal management.....no as I've grown quite close to my new friends at the credit card company.  As for carbs, when they make a good low-carb pizza that doesn't dream of tasting as good as the cardboard box in which it was shipped, then and only then will I decide to abandon my friend the carb.  No my friends, this year my resolutions will center of something of a different nature.  Shocker right?  First of all, I know I've said I was thinking of getting the band back together, and I still might; however, I have yet to make much progress in that direction.  I will resolve to be thankful for each new day in the new year.  Remember, today is not a gift everyone gets anymore.  I will resolve to do more to make the days better for those with whom I have contact.  A smile and kind word are free.  I resolve to get my articles turned in to Connie sooner (sorry if you actually heard my out loud laughter at that one).  I also resolve to attend at least one BBQ competition/festival I have never been to previously.  I don't mean in the competition sense but at least supporting it by attending and paying my fee at the gate.  I am committed to continuing to work on my BBQ technique.  I'm still searching for that perfect taste I have in mind.  The problem is my mind is a bit scattered at times, so my work with consistency is somewhat tainted and not much of a 'straight line' concept.  I'm going to go out on a limb and commit to no longer absolutely, positively hating the Campbell's Soup commercial with the two kids that can't communicate but try to make Wookie sounds as a way to bridge the language barrier.  News flash kids, Wookies aren't real, and if they were real they sure wouldn't sound like a cat trying to sound like a cat trying to purr while hacking up a moose.  Enough of that.  Anyway, I do sincerely hope each and everyone of you has a great New Year.  While we can't control all the events that occur, we can control how we respond to them.  FYI, trying to burn them down is apparently frowned upon by the local constabulary.  Y'all take care, and Riley says, "Anyone want to be a 37-in-1 thing.....brand new condition.  Highly motivated seller."
Posted by Grandpa's Pride BBQ at 1:47 PM