Home Is Where You Park It. 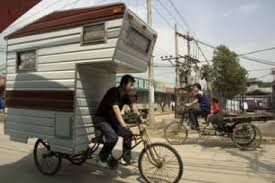 Home is Where You Park It

So I'm sitting in my man cave trying to recover from my work on Shangri-La and I wonder if the bugs that have bitten me all weekend will result in some new mutation of an already existing disease i.e. avian bird flu, Ebola, or dandruff and I couldn't help but think about the evolution of the BBQ housing market. Go to any BBQ competition and you will be inundated with a veritable cornucopia of temporary living quarters. I think everyone would agree, the housing situation in BBQ has improved significantly over the years. Back to the days when Ook and Grunt were hunting T-Rex, cooking over a fire, and living in a cave to the now air-conditioned, satellite-television, 42 ft. RV of today, I would submit things have improved greatly for the BBQ competitor. I remember watching some of the early BBQ shows and all Myron Mixon had an easy up, a table, and blankets. He may have up graded just a bit. So all of this makes me wonder, when we suffered in the heat or freezing cold, did we do better than when we had A/C and other amenities? Were the competitions attended better? Our first foray into competitive BBQ was at the Tri-State BBQ Festival. We had two easy up's, two coolers, 2 ½ smokers, no knowledge what so ever about competition BBQ, but enthusiasm by the truck load. We weren't alone though. Back in those days, while RV's were not uncommon, they weren't the norm either. That night, we got really cold, and it didn't help that all I had was a pair of shorts and a towel that I would warm over the firebox before draping over my legs for warmth. Lesson learned. The first year at Elba, I do believe the temperature might possibly have hit 134 degrees in the daytime with matching humidity to a night-time low of a brisk 98 degrees. Alternately, the first year Elba was in November, I thought for sure this was going to be how I died....hypothermia since I think the temperature got down to -23. Through it all, I learned a lot about competing, made some great memories, and even got a couple of calls along the way. The friends and family that made up Grandpa's Pride BBQ were green and dumb, alternated between sweltering and freezing, had little to no experience, bumbled our way through the competition, and you know what? We had a flipping blast. There was something neat about being out in the open, interacting with the folks next to you, getting to know one another, coveting their trailer/smoker/air conditioning/heat, actively hallucinating from the heat/cold and taking bets on who would die first, or when the folks attending the festival came around passively begging for a sample. It was a real and genuine experience. It was......fun. Fast forward a couple of years and we have Shangri-La. More importantly, we have heat/air conditioning. The experience was still fun, but it started to seem a bit detached. I also started to notice more trailers, a lot more trailers. Bigger and better trailers, toy haulers, RV's, and motor homes the size of my home with fewer and fewer folks braving the elements in the raw. Don't misunderstand me, I'm all about comfort and being comfortable which is why I proudly chose to serve in the United States Air Force versus the Marine Corps. Shangri-La was designed with that sole purpose in mind. I won't lie though, I kind of miss the days being out in the open and interacting with the folks attending the festivals. I actually miss being able to share war stories about the heat/cold of Elba and the flood of Dothan. It just isn't quite the same war story when it centers on the fact the TV antennae would only pick up 8 stations or the wifi wasn't working well enough to stream Netflix. I would throw out this idea as an experiment: Have a competition where no trailers are allowed other than to transport equipment. Everyone would be required to have easy up's, tents, and tables outside. Let the crowds see what goes into the rough and tumble world of professional BBQ competitions. Let them see the excited panic, the frenetic pace of getting turn-in's ready, the afterglow of last box done and gone. Let the attendees ask questions, get inspired, and interact with the teams. And if they are really nice, a little Scooby snack for stopping by and visiting. Just a thought. It's hard to go back to the raw living experience, and I appreciate that. Anyway, just a thought. Still, the folks at the competitions are great, and while I don't compete anymore, I do fondly remember the good people I met along the way. I won't say never, so stay tuned. In closing, with Memorial Day coming up, I ask that you remember those that bore the burden of serving and paid with their lives for all of us. Regardless of your politics, I think those that paid the ultimate price and the families they left behind deserve that respect. Y'all take care, be safe, and Riley says, “Hello....and turn down the A/C.”