What's So Civil About War Anyway? 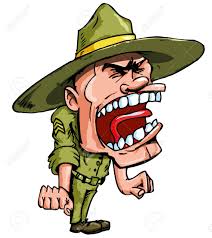 In human history, there have been a great many conflagrations.  There was the first little war between Cain and Abel that started it all.  Move through history and you have the Greeks with their little tiffs; the Romans with every neighbor in reach; the War of Northern Aggression (some still refer to it as the Civil War); W.W. I and the sequel W.W. II; the 'Cold' War; so on and so on.  You get the point.  You would think this accounting would sum up the totality of most of the world's wars.  Well, you would be wrong.  All across the fruited plane there is another war, and folks, it is delicious.  I'm talking about the weekend wars often referred to as "BBQ Competitions."  Oh sure they sometime cloak the battle with amusement rides, food and trinket vendors, creepy clowns making mutated animals out of balloons (the nightmares are real folks), but make no mistake there is a very real war down in the trenches.  Granted, these trenches are lined with 35 ft. motor homes, $5,000.00 pits, and enough easy up's to walk from Porktoberque in Dothan, AL to the Rattlesnake Rodeo in Opp during a rainstorm without getting wet.  The warriors may or may not have the physique of an army ranger.....probably not actually, and there may be a bit of gray in the receding hairline, but these are warriors nonetheless.  Many a grizzled veteran of the BBQ Wars will tell with a far off stare of battles past.  North versus South, Army versus Navy, the Crimson Tide versus.....well pretty much everyone, the freezing cold of Elba in 2013, the Great Monsoon of Dothan in 2015, but these battles pale in comparison to individual battles within each sanctioning body and each individual contest.  You've heard the expression 'Weekend Warriors'?  I submit to you that the average BBQ competitor is just as die hard as any pharmacist fast roping out of a blackhawk on any given Saturday.  Just to put together the shear logistics in competing professionally would scare the planners/organizers from D-Day to Desert Storm.  In fact, I'm almost positive Eisenhower and Schwartzkopf had a plate of ribs at zero hour.....probably not, but it's still a very cool image.  If they didn't, there should be a tradition started right now that if/when we invade another country, there should be a slab of ribs and a quart of sauce on hand.  Granted, saying, "Hey, would you pass me a napkin" isn't as inspiring as, "Don't fire until you see the whites of their eyes", but work with me here.  You can pick out any number of these individual battles in a greater war.  Against whom would Jim Elser of Sweet Smoke 'Q' or Matt Barber of Hot Wachulas battle?  What about Rub or the Backyard Bro's?  Let's not forget Bobby of Haulin' Butt or Wink and Robin of Wink's?  Who knows how the match ups would come off.  Would the Great BBQ Wars result in total human annihilation, the dreaded nuclear winter, or even worse Wal-Mart's closing en masse?  Most likely no.  In the end, it will all be the same:  People will cheer for each and congratulate the team called often and last, they will all pack up, go home, tell the story a hundred times of how they nearly tripped and messed up their turn in box, and prepare to do it all again next weekend.  So if you want to go to a war zone minus the fragmentation grenades and the risk of collateral damage, go check out one of your local BBQ War battlefields.  Yes, there is a good chance you'll have a great time, a definite possibility you will meet some of the nicest people in the world, and maybe just maybe you'll discover a place where you can experience truly a very civil war with a side of sauce and slaw.  If you're real good, I bet you can get a dog made out of a balloon.  Creepy clowns.  Y'all take care and Riley says hello.
Posted by Grandpa's Pride BBQ at 8:03 PM