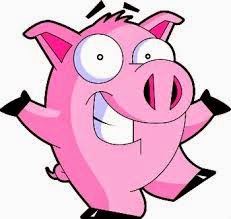 Well, despite all the films and all the talks about protection and staying loyal to the Frankensmoker Mk. 2.2, we've gone and had a new baby.  As they say, "Accidents will happen", and by 'accidents' I don't mean the kind that come from a large cup of coffee with a bran muffin mixed with a traffic jam.  I seem to have the predilection towards creating BBQ smokers out of wood, and this one is no different.  Once something gets stuck in my head, I must build it.  Kind of like Noah and the Ark. Ok, maybe not to that extent, but you get the general idea.  With that said, ladies and gentlemen, I present to you the Igor Mk. 1.0.  It is a pellet smoker with the 12-inch assembly coming from Smoke Daddy.com.  I'm happy with the price of the assembly.  Yes, I probably could have purchased an already build pellet smoker; however, where is the fun in that?  Yes, it would have been cheaper.  Yes, I could have spent my weekends doing other stuff.  Yes, I could have had it right then, but what the heck.  As my wife says, "Yes, you could have bought the one at Lowe's, but no one will have one like this one."  I agree......because she is right and mostly because I'm scared of her and learned to not sass her back.  For y'all up north 'sass her back' is a southern thing.  Onward......Igor is made from 3/4 inch cabinet-grade, birch plywood, and I lined it with 1/4 inch cement backer board.  It stands at 4 ft. and is 22 inches wide in the cook chamber.  I have estimated, and could be slightly off, the weight at 398,078 pounds. 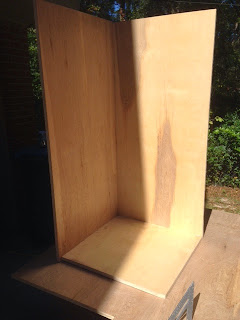 It is your basic cabinet build:  1 1/4 inch wood screws, plywood, profanity (minimally), Tylenol, and coffee.  The gestation period was two full Saturdays and 8 trips to Lowe's and a local hardware store. I went with cement backer board as I was thinking along the lines of a masonry-lined BBQ pit.  With mass, comes heat stability.  That's what the voices told me anyway. 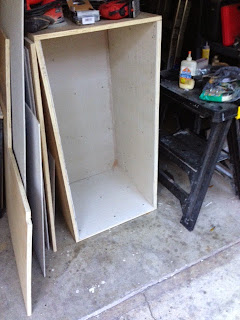 From there, it was basically attaching the heart and brain to the box.  That's where Smoke Daddy came in.  I've been intrigued with pellet smokers and have heard a lot of pros/cons of them.  The biggest pro is I can set it and walk away and go to bed.  That's a big plus.  Not that I think the Frankensmoker Mk. 2.2 is not a great unit because it is.  This is just a new direction without abandoning the old.  Kind of like kids.  You have the first kid and you learn on that one.  You know the one:  the parents are taking the kid to the E.R. if his/her farts smell particularly bad.  By the 15th kid, you're to the point of, "If you run in the house with scissors and gouge out an eye, you better not get blood on my carpet young man!"  You know who I'm talking about.  We all know them and love them dearly. 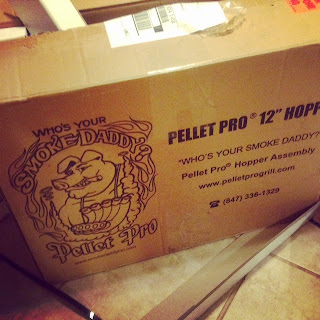 There is a term in psychology called "Neologism".  Basically, it is where someone makes up words.  I had first-hand experiences with this over the last two weekends.  Mostly in an attempt to stay away from profanity.  I created my own language of frustration.  This was a direct result of trying to put in a bolt while simultaneously trying to hold up a 25 pound unit.  Thankfully, my loving wife came home and was able to rescue me from my own self.  Did I mention I'm not the most patient man in the history of impatient men?  From the mounting of the heart/brain came the racks, doors, and heat deflector. 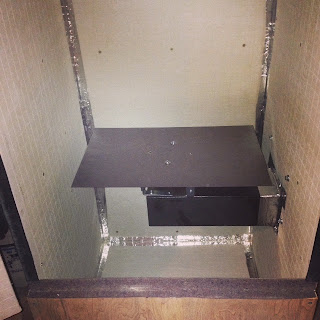 By this point, alcohol was looking like a very real and viable option.  I was tired, was under the firm belief my thighs were going to explode from all the squatting I had been doing, had 3 very small and painful foil tape cuts, and I still wasn't done.  By this point, the child was well on its way into becoming the physical manifestation of my brain race.  Now, it starts to get fun.  Thankfully, I have a very good friend with a welder and little sense for safety.  He let me weld the racks, and I'm happy to say the neighborhood is still intact and not on the 6:00 news as the lead story of a massive fire. 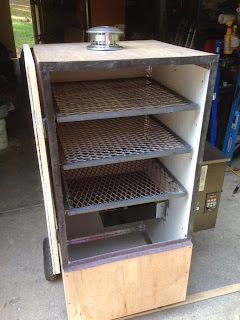 Door attached, seals in place, brain loaded with pellets, and with instructions in hand, it was time to light the fire and kick some tires.  The assembly IMMEDIATELY made this horrible noise.  We had to shut down the unit only to discover some of the wiring had made its way into the fan.  Thankfully, Jimmy Wayne caught it before there was any damage, and we were able to put some electrical tape around the frayed wires.  I was a bit surprised to find the fan assembly had no shroud around it to keep stuff out......by stuff I mean critical wires.  I had initially worried that the box was too big, but my worries were quickly put aside when it got to 400 degrees in about three minutes.  Following the directions, we lowered it to 240 degrees where is cruised effortlessly.  All that worry for nothing.....which isn't uncommon.  So, without much ado, I present to you, the people of the world, the Igor Mk. 1.0.  (Insert drum roll with Ta-Daaaaaa here).  The only thing left to do is to seal the wood.  I'm going for the minimalist effort and will keep it clean. 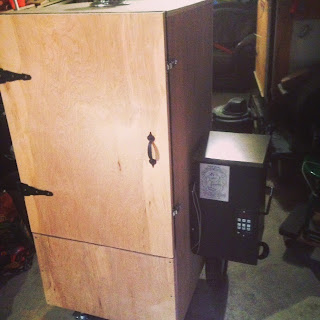 I did change out the exhaust to extend it so it didn't blow the heat right back onto the top of the smoker.  I think this weekend will see a butt or maybe some chicken taking the plunge into the Igor. His big brother is very proud as are his mama and daddy.  Y'all take care.  Riley says, "Hello."
Posted by Grandpa's Pride BBQ at 8:18 PM 2 comments: