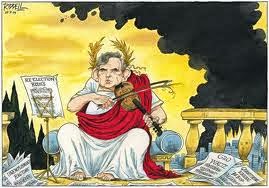 So I'm sitting here at my computer trying to figure out exactly went wrong and right for Team Grandpas's Pride BBQ at the 2013 Porktoberque.  It was a great event with perfect weather.  Kerry Farrell of Main Event, LLC did another outstanding job of organizing.  I'm not so sure about the one music act that was, and I quote, "A redneck rapper."  Let your imagination wonder on that one, but don't let it wonder too far. Anyway, not that we did a horrible job, but we finished 21 out of 29 which statistically is better than we did at Bainbridge.  Our showing kind of makes me think this is what the Roman Emperor Nero thought as Rome burned to the Italian ground. You know the mindset, "Wow, things are really going good for us right now...all is well....nothing can stop us!!...never mind the whole town is going up in flames....my violin please."  I really thought we would have done better than we actually did....maybe a false sense of reality.  This was our first KCBS sanctioned competition which means you get to garnish and decorate the turn-in boxes and there are only 30 minutes between turn in's.  Believe it or not, I kind of liked the fast turn around as you get into a groove. We can now figuratively say we have ruptured our pitted fruit on the KCBS tour.  Don't tell my mother I said that.  She would be disappointed in me.  To get this fiery conflagration show started, I thought we stood a really good chance of getting a call out with our yard bird.  The chicken was tasty, juicy, had bite-through-skin, and wasn't over seasoned.  The shine was blinding.  The problem was the judges didn't seem to have the same opinion.  "It's a bit dark in here.  Brutus, be a good chap and strike a match for us.  What could possibly go wrong?"  Overall, I thought our ribs were the best we have ever turned in, and in our case they probably were....nice shine, tender without being too tender, pulled back off the tip of the bones, sweet with a hint of spicy.  The problem with that is the judges didn't seem to agree with my assessment as we finished 27th out of 30 in ribs and that is with one team not meeting the turn-in time. "Oh Cicero, do you smell something burning?  I could swear to Mars I smell something burning."  In the one category we usually struggle with, pork, we actually did pretty well with 14th place.  Not too bad.  The pork was tender, not too seasoned so that you couldn't taste pork, and arranged in a nice manner and not, to quote a dear friend of mine, "a hot mess."  "Anyone else smell something burning?.....it's probably nothing.  Bring forth the victims.....let loose the lions!!!"  Our brisket had a great taste but wasn't up to the tenderness and juicy level I would have liked, but we didn't do horrible with it either. "What a pretty glow in the sky......wonder what could it possibly be Octavious?  It's probably just your imagination Emperor, but it is getting a bit warm."  All in all, we did have a great time though.  I made it a point to not spend the whole time in the little red wagon this time and that made all the difference in the world.  I got out and did what I enjoy the most and met some really great people.  Mr. Cook of Cook's Portable Smokehouse was there.  Mr. Edward Lovette of Poolside BBQ was parked next to us which was great, and Forrest Dilmore of Forrest's Fine Foods was three sites down from us.  The folks next to us, Mr. Bentley and his brother were really great and helpful.  At 2:00 in the morning, Mr. Bentley was giving me some much needed education on how to prepare a box and what to look for in placement.  I really appreciated that.  He didn't have to do it, but he was did and I enjoyed chatting with him.  Nice folks too.  I also got to meet Bobby Langford with Haulin' Butt BBQ.  They took RGC and I was happy to see it.  A really nice guy.  The Frankensmoker Mk. 2.2 was popular as usual with many visitors wanting to see the plywood smoker.  I was disappointed in our placing, but was more than satisfied with the time I got to spend with friends old and new.  Grandpa's Pride will learn from this one and gear up for the next one.  We will be taking our little show on the road to Elba, AL for the Foggy Bottom BBQ Bash in November.  I'm looking forward to it already.  It is probably our favorite one. So just as Nero played the fiddle while Rome burned to the ground, we too will ignore the bad and throw ourselves into the good and enjoy every moment of it.  There were certainly many more good things that came out of Porktoberque than bad.  Good folks, good times, perfect Southern Fall weather, and I got me an ear of roasted corn.....which was nice.  The fact the Crimson Tide beat Ole' Miss wasn't a bad thing either.  The Latin phrase Nos Sugere translates into "We suck" but I think instead of making that the team motto, we will have to find something else.  Maybe I'll look and see what is Latin for, "Hey y'all...where are they selling roasted corn?"  Y'all take care and Riley says, "Barkus woofus."
Posted by Grandpa's Pride BBQ at 12:25 PM