Birthday and BBQ....You'd never think they were related. 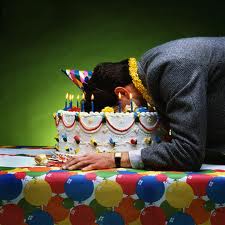 So I'm sitting at the kitchen table doing work on my off day, and it suddenly dawned on me how we can relate BBQ to our birthday.  Yes, 44 years ago today this great nation of ours was blessed with my 4 lbs. 13 oz. presence.  I'm told I was 17 inches long and can only hope that means my total length from head to toe and not some other arbitrary measurement.  If not, somebody has got some explaining to do.  Yes, I was a bit early, but have more than made up for my size since then.  Today, as I celebrate this great day, it gives me pause to ponder back on my 44 years.  44 is a great number, two even numbers, repeating even numbers, a great caliber in a handgun, Reggie Jackson's number when he played for the New York Yankees, a great test score if you are 44/46, and looks like two sails on a boat.  Don't know how that last one matters but it fits so what are you gonna do, you know?  I remember when my parents were 44, and that age seemed pretty old to me back then.  Today.....not so much.  In 44 years, I have been saved, fallen in love, served in the military, graduated from college twice, gotten married, buried two loving grandmothers, seen my parents divorce, served in law enforcement, seen the Cold War end, have lived through 9 presidents, developed friendships and relationships that are still going strong, been called an angel and been called a son of a (fill in blank), felt the euphoria or being so happy and on top of the world that I couldn't stand it and felt the sharp, searing sting of hurt and grief.  However, to quote the song, "life's been good to me so far."  I couldn't help but think about my time doing BBQ as it relates to my life or anyone's life in general to some degree.  Stay with me here as I try to knit a reasonable argument from my cake and ice cream induced delerium.  When I first started out with BBQ, I was like an infant and I knew nothing.....less than nothing if I'm honest.  I stumbled and fell..........a lot.  Over time, I began to crawl then walk.  In BBQ, I started to learn from what I had done.  I began to learn from my mistakes and build on my successes.  I didn't know what I needed to ask, so I just watched everything I could.  Soon, I began to grow into a teenager where I started to develop and learn.  Like a teenager, I bounced from style to style trying my best to find something that worked, and I often drove those around me crazy.  Something I could own and call my own.  I had some successes and thought I knew all there was to know.  After all, we were backyard grand champions....how hard could it be?  When I was a teenager, I just had to have this or that to make me "successful".  Just like a teenager or young adult and just like my BBQ.  And like most teenagers I'm sure I gave my parents a greater understanding of why some animals eat their young.  Thankfully, my parents were loving and didn't bury me in the backyard, and I began to mature a bit and realized I didn't know squat.  I also realized I didn't need every new toy or gadget in life to be successful or to make decent BBQ.  Just as in life, I thought I knew what I needed to know.  Only later did I find out that the true measure of intelligence isn't an I.Q. score or academic achievements, but it was the recognition of what we don't know and that we all continue to learn.  Do I still like gadgets and toys?  Of course I do.  The good part is I now know what the most important things in life are, that and the fact I have a job and can actually buy the cool gadgets out there.  In reality, the most important things are family and friends that are good for me, Salvation through Jesus, enjoying the little things in life, slowing down to enjoy the moment, all the great people you get to meet in life (especially those at a BBQ competition) and remembering, "If you're lookin', you ain't cookin'."  See folks, BBQ is like a lifespan. We start out screaming and running around like a chicken sans our head, and hopefully we mature into grown adults who realize that low and slow really is a great way to go.  Thanks for reading this.  I hope I made some sense here as I have waxed philosophically.  Forrest Gump said, "Life is like a box of chocolates....you never know what you're gonna get."  I agree, but prefer the BBQ side.  "Life is like a BBQ competition, you never know what the dang judges are looking for so no matter what, just stick it in the box and go with it."  Sounds like life doesn't it?  Anyway, who knows if I'll have another 44 years on this giant mudball we call Earth, but if I do, you can bet there will be some laughing and BBQ going on.......probably laughing at my BBQ and me yelling, "Back when I was your age.....!!!"  That and trying to figure out if that warm, wet sensation running down my leg is a problem or not.  Joy.  Y'all take care and Riley says, "Happy birthday!!"
Posted by Grandpa's Pride BBQ at 9:54 PM