So I'm sitting at the computer trying to figure out how to say what I want to say.  For those that know me, being short on words is somewhat of a surprise....I imagine much like finding a wart on a very private place would be a surprise.  The Foggy Bottom BBQ Bash 2012 has come and gone, and I can say I learned many things about the in's and out's of BBQ competing through this competition that I would like to share with others who aspire to compete at the pro level in BBQ competitions.  #1:  Weathermen/women lie like Persian rugs.  The temps were not supposed to go below 43 but somehow found their own little way to 35.  Being on a river didn't help matters much either.  I've been cold before but in a place I expected to be cold i.e. Montana, Ohio, the Arctic Circle, and in a restaurant where an ex is having dinner with her family.  So, if the weatherperson (?) says 45 count on -23 much like if they say a high of 85 count on 103 or just this side of the surface of the sun.  I'm referring to Elba, August 2010.  #2:  Never, ever, ever make a change to how you do something related to BBQ at a competition.  I don't care if it is something as simple as whether or not you  cook at a different temperature, use a different cooking style, start at different times than what you have already established, use a different woodland creature you offer as a sacrifice, or if you decide to suddenly take up speaking in a made up language; although, I don't see how that could really impact your 'Q'.  Whatever it is you decide to do, at the time of the competition is not the time to go all renegade and try something new.  Never.  I think it is a better idea to take up the old-world sport of being a matador, while blindfolded, with a questionable mole on your temple, while reading the book, "So You Think You're a Man Trapped in a Woman's Body".  I could be wrong though.  #3:  BBQ judges are going to give scores as scattered as a covey of doves.  Is it covey?  It could be herd, gaggle, or congress for all I know.  In this last competitions, I had a lot of scores that were 9.0 or above but one judge would invariably give me a 7.5 or an 8.0.  FYI:  7.5 and 8.0 are not great scores.  This proves what many have told me in that all of the judges have their own personal style that they like and tend to lean towards that.  I'm fine with that.  I have my own personal preferences as well such as clean socks/underwear, never sharing a toothbrush or my clean socks/underwear, never buying used socks/underwear, and my BBQ on the sweet/heat side.  In watching BBQ Pitmasters, you see the pro's scoring in the middle to low end on some and taking grand champion in others.  The only thing is, they don't do one thing differently.  So in essence, BBQ Competitions are a bit of a crap shoot.  I do need to make improvements; however, we did get a 9th place call out in chicken, 12th in brisket and I honestly don't remember the scores for ribs and pork.  We finished 21 out of 25 which isn't horrible for first time pro.  Before I forget:  #4:  People who compete in BBQ competitions are some of the friendliest, giving, and neighborly people you will ever meet.  Mr. Forrest Dilmore of Forrest's Fine Foods actually gave me a good luck charm.  Apparently, he is BIG into the claw machines you see at restaurants and stores.  He brought us a blue hippo for luck....good luck I'm assuming.  We named him Hemi the Hippo.  He didn't have to do it, but after spending some time with him, he said, "Wait right here.  I have something for you."  That's when he brought us Hemi.  When we were borderline hypothermic and the ambient temperature was hovering around -21, which coincidentally was my core body temperature, one of the other competitors gave us a fire pit and wood.  I think Jimmy Wayne almost crawled into the fire pit.  That's just the kind of people you run into at these competitions.  Everyone knows everyone else.  It was nice to see everyone cheering for all of their friends even if their friend was on another cook team.  If you get a chance to attend a BBQ festival, I encourage you to go.  Where else are you going to get really good BBQ and a fried Twinkie?  Yes, I had the fried Twinkie, and I'm not too proud to say it was pretty darn good.  Got a nice long-sleeve shirt with the Foggy Bottom BBQ Festival  logo on it too....not as good as the friend twinkie but good none the less.  Y'all take care and Riley says hello.
Posted by Grandpa's Pride BBQ at 6:00 AM No comments: 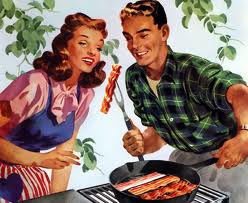 So I'm sitting here worn out and just looked at the countdown on my blog.  14 hours until the Foggy Bottom BBQ Bash.  I say worn out, and by that I mean as worn out as one person can be making brines, injections, rubs, and sauces.  Add to that, going over my checklist for packing.  Some would say I'm a bit O.C.D. while others would say I'm clinically there.  Either way, it works for me.  I really don't know how the guys that are pros do this week in and week out.  To top it all off, many run restaurants and cooking schools on top of that.  I do know this, I am excited about my team's first foray into the professional division.  My opinion on going pro is simple:  The worst we can do is come in last and they can't cook us and eat us 'cause that would be wrong.  I remember our first run at the Foggy Bottom BBQ Bash three years ago, and to say we didn't know what we were doing is a bit of an understatement.  By the second year, we were doing better except for getting ourselves disqualified from ribs due to a really stupid mistake on my part.  Last year, we improved and got Grand Champion in the Backyard Division which ain't bad.  We have participated in the Tri-State BBQ Festival a couple of times as well and have improved each time there as well.  I must say hearing your team name called out is pretty exciting.  For those who don't do the BBQ thing, you may not quite get what all the fuss is about or what is exciting about sitting in the freezing cold or searing heat just to watch a smoker all night and day while spending money that could go for a lot of other things.  First of all, the other people there are just about the nicest people you could ever meet.  That doesn't mean they will tell you how they do what they do, but each and everyone says hello or walks around and chats.  The Frankensmoker Mk. 2.1 has gotten many comments and has been the source of many friendly conversations with other cook teams or visitors.  Mostly, it is a chance to hang out with friends, smell some good smells, eat some really good food, and just slow down a bit.   So with all this said, if you get a chance to find your way to Elba, AL you should come and check out the Foggy Bottom BBQ Bash.  The weather is supposed to be good.  I'm sure there will be good food, and if nothing else, you can come and sit a bit by the firepit with us for a bit.  That is until I have to do something with the 'Q'.  At that point, as they say, "You ain't got to go home, but you got to go from here."  Y'all be safe and Riley says hello.  Oh, by the by.  My wife and I were in what I refer to as God's Country (Tuscaloosa, AL) last weekend, and it just so happens we found our way to Dreamland BBQ for some ribs.  I haven't had Dreamland since I was a student at the University of Alabama back in 1994.  The atmosphere is still the same and the folks as still just as nice.  Funny thing though, the ribs weren't what I remembered them being.  I have been told that this is directly related to the fact I do my own 'Q' now, and all 'Q' will be compared to my own 'Q'.  I'm sure it is some sort of occupational/recreational hazard.  Sort of like a brewer drinking someone else's beer.  Somehow is just isn't the same.  Either way, the experience was a nice trip down memory lane.  Y'all take care.
Posted by Grandpa's Pride BBQ at 9:12 PM No comments: